“And God said, ‘Let there be lips!’” is a traditional interactive statement heckled by endless fans across the world during The Rocky Horror Picture Show. It’s one of many uttered dialogues that have allowed audiences to participate within the film’s narrative structure. In time, this interaction not only altered the aesthetics of this cult classic but it develops this cyclical reinvention of the film’s thematic experience. Thus, The Rocky Horror Picture Show (RHPS) has continuously rediscovered its audiences through the years. 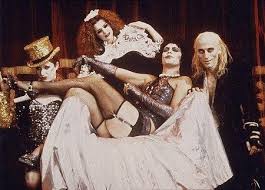 Released in 1975, RHPS was hailed as a box office failure until Tim Deegan, advertising executive at 20th Century Fox, suggested to have midnight showings at the Waverly Theater in New York’s Greenwich Village. With financially successful runs of Night of the Living Dead (1968), the studios were banking on The Waverly to mimic the same returns. What began as a marketing move turns into one of the greatest accidents in cinema. The Rocky Horror Picture Show becomes a cultural phenomenon. But how and why did that happen?

One possibility to the film’s success roots to Lee Manovich’s theory of cognitive prostheses. His article “Visual Technologies as Cognitive Protheses: A Short History of the Externalization of the Mind” examines how the brain processes images to develop its own synthesis. Manovich incorporates Soviet filmmaker Sergei Eisenstein’s concepts of externalization in which thesis and antithesis merges a psychological process of synthesization. Though visual imagery is Manovich’s focus, I think these mental prosthetic extensions can be influenced by sound and touch and by this assessment, it’s these sensual processes that materializes the aesthetics of the Rocky Horror Picture Show.

Sal Piro’s “It Was Great When It All Began” is an article that discusses the genesis of the RHPS through his early experiences in the late 1970s. According to Piro, the film was only to be traditional spectator film but Denise Borden, manager of the Waverly, started to implement inventive marketing concepts such as playing recordings of the RHPS soundtrack before every show. This would warm up the crowds thus creating a party atmosphere that is now synonymous to the famous film. Piro explains, “The audience naturally began to respond, by booing the villain and cheering the heros..” It’s these early forms of verbal interaction that Piro says “spawned a whole of group of regulars” Fans such as Bill O’Brien (first fan to dress as Frank-N-Furter), Lori Davis, Louis Farese and two young ladies from the balcony named Teresa and Amy were consistent audience participants and eventually became pioneers of this interactive experience.

After every show, audiences will speak out between the movie’s scripted lines. A funny example of this interaction is during the film’s rain sequence where Louis Farese yells out “Buy an umbrella, you cheap bitch!”. Piro describes how Louis would call this participation as “counterpoint dialogue.” It’s here where the bridge between art and spectator start to cross paths. It’s also the infinite beauty of the RHPS. Fans at any show can randomly call out or even express themselves without violation. Piro acknowledges that even the current productions of RHPS in which too many people just scream out onto the screen creating a traffic of dialogue that congests rather than convey the interaction, is still all part of the film’s participatory charm.

What was most important to Sal Piro and to most of the fans is this idea of thematic prostheses. Whenever someone chanted a line, if anyone liked what they heard, he would reinstitute it at later shows. We see this with Alan Riis’ trademark “And God said, ‘Let there be lips!’” who was an early Rocky Horror participant. This recycling of ideas allows the aesthetic to grow, change, and eventually reconnect to the spectator. It’s also the communal nature of the event. If an new idea in embraced, it acts as this invitation to the participant thus developing a sense of artistic ownership to the aesthetics. 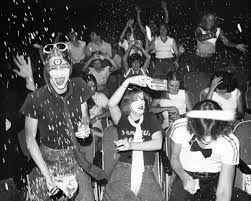 Counterpoint dialogue is only one path to the interactivity to The Rocky Horror Picture Show. The institution of props enhanced the film’s audience participation. After earlier fans started to throw confetti during the marriage sequence, O’Brien and Davis elaborated on that idea by handing out rice at later screenings. This participation started to stimulate more ideas with the use of props. Since the wedding sequence is shot in the rain, audiences started to bring water pistols to mimic the scene. Naturally, these ideas influenced more texture to the aesthetics which eventually resulted to the introduction of umbrellas, raincoats as well as the film’s iconic newspaper hats. 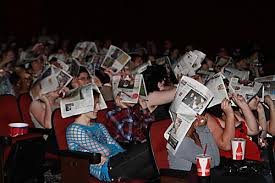 Everyone is a star without prejudice in the RHPS experience. My little sister had told me that she has gone to many of these shows in which all of the interactive casts where all women. In addition, interracial cast have also been apart of this universalism. No one is a typecast. That’s the freedom of interactive art, anyone and everyone can reinvent the aesthetics and at same time, reinvent themselves.

A year ago in Grand Rapids, Michigan, Tom Chance of mlive.com (a Michigan entertainment wedsite) writes about his first ever experience of at the RHPS. It’s perfect example how the experience still honors traditional participation but continues to add to the aesthetic prosthesis such as implementing glow sticks and toilet paper.

Sexuality in a Rocky World… 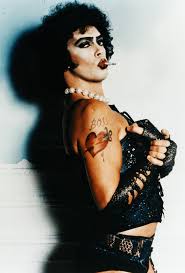 If there is a universal connection with all audiences of the RHPS, it’s the ambiguous and blatant themes of sexuality. Screenings from around the world have embraced this sexual expressionism but I also feel that it is the force of this interactivity. Sex by its very nature is participatory be it a cognitive form of prostheses or physical collaboration of sorts. Multiple levels of erotism are explored which formulates this utopian world of hetero, homo, and asexuality. It’s this human unity of sexual acceptance that has bridged audiences form Europe, Asia, and Australia.

Here’s an example of this sexual liberation at the Studio Galande in Paris: 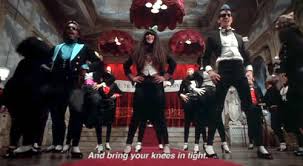 “Time Warp,” the great musical number and immortal anthem of The Rocky Horror Picture Show, is the epitome of interactive media. It is a song with verbal direction that invites audiences to jump into the act. Periods in which the audience is told where to position their body produces this simplistic participation of dance hence externalizing these cognitive and physical connections. I think it is through this invitation of interaction that illustrates the ultimate beauty of The Rocky Horror Picture Show. It is here where audiences are asked to do the “Time Warp” again, and again, and again…

Manovich, Lee. “Visual Technologies as Cognitive Protheses: A Short History of the Externalization of the Mind”

Piro, Sal. “It Was Great When It All Began” http://www.rockyhorror.com/history/howapbegan.php