Since 2008, the Museum of Copenhagen has begun to take steps towards redefining it’s role as a city museum to serve the contemporary and diverse urban culture that has recently shaped Copenhagen. In late 2009, the museum was presented by the city with the unique opportunity to research, document, and interpret local archaeological excavations around the city. After much developmental designs and deliberation, the museum decided to create an outdoor interactive digital wall. In April 2010, the Museum of Copenhagen unveiled a giant multi-touch multimedia installation called VÆGGEN, or the WALL. This mobile installation, which is housed in a industrial shipping container, is an outside exhibition that allows residents and visitors of Copenhagen to explore the history and cultural geography of the city right at their fingertips. 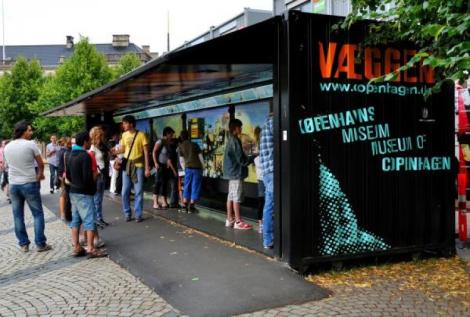 The Museum of Copenhagen admits that, like many contemporary city museums, they struggled to deconstruct totalizing meta-narratives on history and culture and that it was crucial to join the ranks of other digitized modes of learning and knowledge. The WALL is the museum’s active experiment in articulating and understanding interpretations of history through identity and opening the doors of cultural democracy through reinvention of traditional museum practices. After months of initial outreach, the museum gained a sense of urban mapping that dealt more with ideology and intuition rather than physical geography. This new awareness of the city’s landscape and non-linear approach to urban mapping lead to the WALL’s emphasis on psychogeography.

To capture the visual analogy of Copenhagen’s psychogeography, the museum decided upon a 3D collage approach spread across its four HD plasma screens that would have real-time connection to the media database. With a simple tap on the collage image, the user can easily invoke the collection form of the image and its metadata. The 3D collage comprises of various 2D photos that are highlighted and partially exposed, which are then layered by places, time period, and themes that celebrate the subjective and psychological views of the city. According to Sandahl, the interactive and playful experience between the juxtaposed images created “. . . new associations and visual meanings, and heightens the users’ curiosity to discover the form and meaning of the original components.” Additionally, a widget side bar allows users to browse through ‘albums,’ change the displayed language, and even ‘like’ photos and ‘share’ text or video comments. Statistically, the most popular function to date is the ‘send a postcard’ feature that allows visitors to take a photo or video using the cameras that are attached to the WALL and send e-postcards using their email addresses. 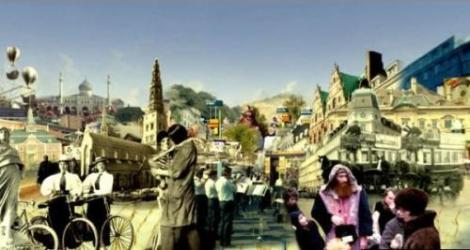 The theory behind the WALL is complex and difficult to pinpoint due to the fact that its design and function can be both incorporated and ignored in various interactive theoretical discourses. In this post, I’ll be focusing on the theory that explains the Museum of Copenhagen’s foremost concern: the audience. The shift from a traditional museum discourse to one of public participation needed to focus not only on providing a larger sense of personal ownership of the museum’s collections by the people and allowing a plurality of viewpoints to be explored, but also designed to attract the immediate attention of its audience. This understanding of participatory culture lead to the creation of VÆGGEN.

Henry Jenkins begins his chapter, “Interactive Audiences?”, by quoting the tagline for an Applebox Productions ad: “You’ve got fifteen seconds. Impress me.” (p. 157) The primary challenge that the museum had to combat through the development and unveiling of the WALL was how to maintain audience interaction with it. Understanding that audiences are active, critically aware, and discriminatory, makes it vital to incentivize their attention. (p. 157) Thus, the WALL was designed with an incredible and playful 3D collage of photos and structured in a point-of-view framework that allowed users an “endless” experience of exploring the city through haptic interaction. After the first several months of its unveiling, the museum observed that user sessions at the WALL lasted anywhere from 20 seconds to 3 hours. Although most users spend more time on the postcard function than exploring the WALL images, the museum observed that the WALL promoted users to engage in highly social behavior. Because the WALL produced an environment where collective experience could thrive, users of various ages and genders were incentivized to stay and explore the WALL even further.

One of the most impressive features about the WALL and the adjoining WALL website is its ability to allow users to upload their own photos to the media database, which has given the museum the opportunity to develop and diversify its collections. Sandahl remarked that “[o]ne of the most fulfilling experiences for [the museum] was to observe how some user uploads enter into a visual dialogue with the museum’s material.” Following Pierre Levy’s argument on collective intelligence, the user’s act of personally contributing to the WALL’s collection of images is an example of the “deterritorialization of knowledge” which allows for the broader participation of a community and breaks down geographic barriers. (p. 158) A reciprocal exchange of information is made between the museum and WALL users, and a relationship defined through common intellectual endeavors and emotional investments is developed. (p. 158) 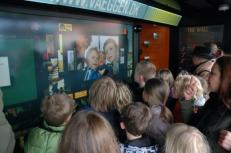 Although in 2010 the WALL was a new and budding experiment in reinventing traditional museum discourse, by 2016 the WALL had become a thriving exhibition. Today the WALL has attracted more than 1.5 million visitors who have uploaded and shared more than 500,000 photos and videos. Due to it’s popularity in Copenhagen, the WALL was reproduced at the El Paso Museum of History in El Paso, Texas, where it is affectionately known as DIGIE. Through a focus on participation culture and collective intelligence, and a conceptual understanding of psychogeography, VÆGGEN has achieved great success as a haptic interactive medium that not only has allowed users to feel connected to their community, but also to understand their identity within their community by reorienting their perspective of history and culture.