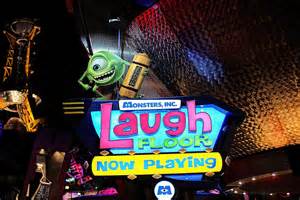 Monsters Inc. Laugh Floor is a family friendly comedy club based attraction located in Disney Worlds Tomorrowland. The attraction opened in 2007, so it is one of the newer attraction at Disney World.  The attraction is based on Disney/Pixar animated film Monsters Inc.,the show is hosted by Monsters, Inc. and Monsters University’s very own Mike Wazowski, he is joined by other monster friends with the goal to get enough laughs to fill up the laughometer. The laughometer is what power their town Monstropolis, so they really need the laughs.

The purpose of the attraction is audience participation, while guests are standing in lines they are asked to text their jokes to a number to be used in the show. To make it even more personal they ask for the hometown and the name of the person sending the joke. As guest make their way into the 400 seat comedy club they are already excited to see if their jokes made the cut, and if they will be awarded a chance to be in show.

Disney used Living Character Initiative (which is a fancy term for on screen animated characters that can interact directly with the audience) and Digital Puppetry (where live actors can see and hear the audience while their movements and voices broadcasted on the screen as a character in front of the live audience). These two concepts make this attraction ground breaking! By using digital puppetry it allows the show to be different every time, and become personal to the audience, which makes visitors wanting to come back for more. The actors behind the scenes controls that character on the screen with a video game like controller, so they can look right at you if they are talking to you. The actors voices are synthesized through a computer so they sound like the character you know from the movie.

Secondly the comedy club as roaming cameras that occasionally focus on an audience members and projecting them on a big screen. This is used for different things during the show either to direct a joke, make them a punchline, or ask for them to participate. If asked to speak a staff member will bring around a microphone so everyone can hear their answer. As the show progresses they might use the same person or people over again to make the show even funnier. Like the “that guy” gig, where they poke fun at “that guy” for everything, and at the end of the show receives the “I was that guy” pin.

The best part comes during the middle of the show Mike’s little cousin Marty comes out for the most anticipated part of the show the audiences texted in jokes. They used 3-4 of the jokes texted in before the show and they include the name and hometown of the person who sent it in. If there is a joke to be made about the hometown or persons name it is made (in good taste of course this is Disney).

Though the material is unscripted, the show has the same design, characters and some of the same jokes, but what makes it different every time is the audience is different, the interaction design allows the audience to create and control the show they want to see every time. What is so great about the interactivity is that you don’t even really realize that you are fueling the show, it isn’t until after you have visited the attraction a few times you really become aware that you are most important part of the show.

Watch this video of one families experience!!!!

Why would want to visit this attraction?

This show is for all ages, it is family friendly enough to entertain the little ones and funny enough to keep adults laughing. As for the adult male the goal is to become “that guy.” They also keep it fresh by switching the show up by the advancements made in the Monsters Inc. franchise. When the show first opened it was based on Monsters Inc. the movie, now is based in Monsters University the newest movie in the franchise. This keeps the show current unlike some other attractions.   If this attraction does it for you head over to EPCOT after and visit Turtle Talk with Crush which uses the same ground breaking technology as the Laugh Floor. 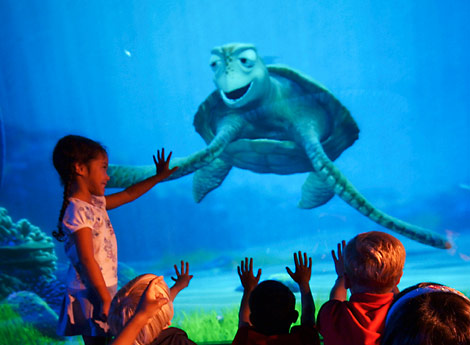