In filmmaking, video production, and other media, live action refers to cinematography or videography that does not use animation (though sometimes based on an original animated series). As a volunteer in Future of StoryTelling Summit, I concurred Vrse for the first time in the VR Tent. Vrse is a company works on VR storytellings, especially for live actions. Vrse is consists of VRSE.works (production), VRSE.farms (storytelling) and VRSE.tools (hardware), with the focus expected to be completely on making virtual reality films.

There are two short films are produced by the United Nations. One is named Waves of Grace, which is talking about a Liberian girl who was a survivor of the Ebola virus. The other the United Nation film is talking about the breathtakingly living condition in Syrian refugee camps, which is named Clouds Over Sidra . I was helping with the setup and introduction of those to films. I can see the astonished feeling during and after the audience of those VR films.

Through the communicating and learning through the different activities that were held in NYC, such as FoST, NYFF, NYTVF, NYC Media Lab and so on, VR films are mainly divided by three aspects: live action, animation and live action with CGI. The third type is rarely seen and this is the type I want to explore further and do some experimental projects on. The second type, the animation is a more mature aspect in VR industry, since storytellers have more power to control the story. One big issue in VR storytelling is hard to let the audience stay clear in the specific storyline, since audience may lose the vital movements of the main characters, and this will influence the understanding of the whole story. The VR animations, especially Google Spotlight Story, figured this question out by technical solutions, the vital movements won’t happen until the audiences’ view is focus on the characters who is going to move. However, this problem is hard to work out in the live action VR films. The stories are ongoing and characters have to move and talk even though audiences are not looking at them. So this issue might be the main reason why there are seldom complicated storytelling VR films come out.

We can see from the VR works in Vrse that, at this stage of live action products in VR, narratives are essential in storytelling. As we all know that, excellent films may tell a good story by few narratives. I hope we can figure out how to reduce the narratives in VR films to make a good story. In those two UN VR films, Clouds of Sidra and Waves of Grace. Two girls’ narratage voice are keep appearing and the camera is still, in this way, still 360-degree camera can reduce the motion sickness. Though the 360 viewing can amplify the empathy, in the other hand, the power of the camera is reduced since the loss of moving and people will easily get tired of those long shoots. Stories have to be told by narratage is a huge constraint in VR storytelling. Besides, when viewers are exploring the 360 screens, they can always find a flaw in the position of camera tripod or camera holder. Sometimes it is blurred and sometimes the camera holder can be seen in the scene. Apparently this is slightly distracting the viewer from the highly immersive experience. These two live actions produced by the United Nations are documentaries, giving audience opportunities to have more empathy on the place that you can never go to, know the story that is extremely far away from you. In these two films, children can look through into the camera, this interaction also happens in House of Card. While the characters in the film looking at you. That means a deeper communication audience would have in this viewing experience.

There’s also a Virtual Reality news broadcast covers the Millions March in New York City. 60,000 New Yorkers took to the streets and marched as one to call for an end to racial profiling by police. Alice Speri reports from inside the protest. While viewer saw the angry people and hearing the angry shouts in the 360 atmosphere, the whole body is shaking, shaking with the shocking from the bottom of the heart.

The other types of live actions are more live streaming, the Stanford football team, for example, on Saturday’s “College Gameday” on ESPN, the Stanford football team showed VR football experience. This technology being used with quarterbacks also allows coaches to get in the minds of the quarterbacks as they look at the way defenses are set up, so they can see what their quarterbacks see. NextVR,  collaborated with the International Champions Cup (ICC). Those live streaming VR sports shows strengthen the feeling of involving both from viewer and participants of the sports. Also, the Saturday Night Live produced a 360 live streaming show in its 40 years celebration. Audiences can see the whole crew of TV making crew, even though the procedures that should be invisible for the audience in traditional TV viewers. In this way, people would focus on the meaningless little movements of camera man, or people would easily miss who was the one talked, since after turning the view to the direction of the voice may come from, the people who speak is already sat down and hard to distinguish who proposed that question to the host. 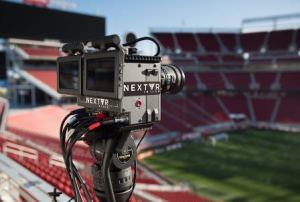 “You can read a story about someone and feel sympathy, but when you see it through their eyes with this you feel empathy.” said by a viewer during the NYTVF. Contents of unfamiliar things are a mainstream in VR films currently. This is a huge jump in giving people empathy through media, people would feel a superlative feeling of ‘be in there’ in the VR circumstances within few seconds. “Stereoscopic viewing enhances the perception of depth and the sense of space. The virtual world is presented in full scale and relates properly to the human size.” Said Beier.

As the analyzing in Pushing the contradictions of the digital by Thomas Elsaesser, VR would be replaced by the newer technology such as ‘remote control’ device or ‘closed circuit’ observation, which is making the prosthetics less and less obtrusive. In this case, VR industry should find the specific ways to let it continuously prosperous.

Every media requires the audience, so does VR. Since it is still an emerging media, creators should find ways to let VR walks into normal people’s lives. Finding powerful stories that can influence people in the other media and figure out the way how VR could tell those stories. Second, the stories should ally with the VR media, more focus on the stories that requires amplified images, mysterious places, also, reduce the loss of information during viewing. Third, carefully evaluate the feedback of the audience is an essential way to produce better VR films.

Pushing the contradictions of the digital: ‘virtual reality’ and ‘interactive narrative’ as oxymorons between narrative and gaming, Thomas Elsaesser, 24 Jun 2014